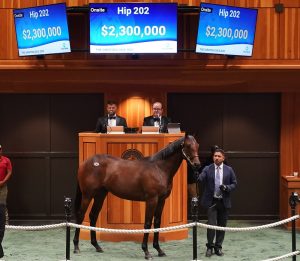 Led by his sales-topping $2.3 million colt, Gun Runner had a pair of juveniles bring seven figures during Tuesday’s closing session of the Fasig-Tipton Saratoga Yearling sale.

The sales topper brought late fireworks from the Gainesway consignment, selling as hip No. 202. After a protracted bidding war, M V Magnier and Peter Brant’s White Birch Farm emerged as the winning bidder for the colt bred by Debby Oxley.

“What can anybody say about Gun Runner?” Magnier added after the purchase. “He’s a very good sire, what he is doing is very good.”

Magnier was also the winning bidder at $1.4 million for Gun Runner’s hip No. 186, a colt consigned by Denali Stud on behalf of Earle Mack.

“We are over the moon. Elated doesn’t begin to describe it,” said Denali’s Conrad Bandoroff. “We’ve had him since the day he was born.”

The chestnut colt is the first foal out of the unraced Giant’s Causeway mare Flag Day. This is the family of Whitney S. (G1) and Jockey Club Gold Cup (G1) winner Diversify.

Gun Runner had a total of eight yearlings sell during the two-day auction for an average of $704,375.

Gun Runner currently is atop both the 2022 Second-Crop Sire list and 3-year-old Sire list with more than $7.5 million in progeny earnings. His 3-year-olds have won this year’s Haskell S., Preakness S., and Santa Anita Derby, all Grade 1 events.