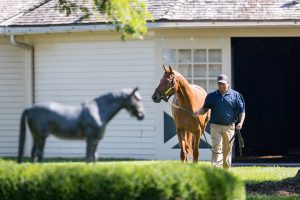 Three Chimneys Farm has made a significant impression and impact on the landscape of the Thoroughbred industry over its 40 years in the business, and is prepared to make a positive impact for the next 40. Famously started as a small boarding operation of nine mares by Robert and Blythe Clay, this Midway, KY farm has built a strong and proud tradition of achievement. Three Chimneys has managed the careers of some of the top stallions in the history of American Thoroughbred breeding like Seattle Slew, Dynaformer and Rahy, and has also been involved with the breeding and or racing careers of such stellar mares as Hidden Lake, Pompeii, Gorgeous, Ave, and Miss Keller.

In November 2013 a new chapter in this illustrious history began when the Borges-Torrealba family acquired a controlling interest in Three Chimneys Farm. While maintaining its family-owned feel and comfortable atmosphere, Three Chimneys is managed by a professional and highly qualified staff, ready and able to serve the various needs of its clientele to ensure growth and positive results.

Since that time, the farm has raced or bred seven Grade 1 winners, topped of course by 2017 Horse of the Year Gun Runner, a six-time Grade 1 winner who won the the Stephen Foster, Whitney, Woodward, and Breeders’ Cup Classic during his championship season and finished his career with a win in the Pegasus World Cup (G1) and lifetime earnings of $15,988,500.

Three Chimneys’ first Grade 1 winner as owner was 2015 Acorn S. (G1) winner Carina Mia, who also won the Eight Belles S. (G2) and Golden Rod S. (G3). In 2018 the farm owned or bred a trio of Grade 1 winners: Skitter Scatter, bred in partnership, won the Moyglare Stud S. (G1) in Ireland; Restless Rider, co-owned with Fern Circle Stables, won the Alcibiades S. (G1) and finished second in the Breeders’ Cup Juvenile Fillies (G1); and the farm’s colt Funtastic won the United Nations S. (G1). In 2019, Structor, from the first crop of the farm’s stallion Palace Malice, won the Breeders’ Cup Juvenile Turf (G1) and was named an Eclipse Award finalist for 2-year-old male. Structor sold for $850,000 at the 2019 OBS March 2-year-old sale. Also in 2019, Guarana, bred by Three Chimneys and co-owned with Hill ‘n’ Dale Farm, won the Acorn and the Coaching Club American Oaks (G1) and was named an Eclipse finalist in the 3-year-old filly category. In 2020, she added the Grade 1 Madison S. to her resume.

The newest Grade 1 winner came in 2020 when Volatile won the Alfred Vanderbilt S. (G1). Co-owned by Three Chimneys and Phoenix Thoroughbreds, Volatile is standing his first season at the farm in 2021.

The Farm’s notable Graded stakes winners include 2-year-old colt Made You Look, winner of the 2016 With Anticipation S. (G2) and the Dania Beach (G3) the following season; Rainha Da Bateria, who took the Canadian S. (G2) in one of her three graded stakes victories; and the farm’s latest graded winner Envoutante, winner of the 2020 Falls City S. (G2) and Remington Park Oaks (G3), homebred Royal Approval winner of Matron (G3).

Among the farm’s graded stakes horses are Princesa Carolina, Magic Dance, Gun It, Much Better and Tomato Bill, all bred and owned by the farm, and Lady Zuzu and Princesa Caroline, both purchased and raced by the farm. Stakes-placed runners Fluminense and Spitefulness were both bred by Three Chimneys, with the former also campaigned by the farm. Mundaye Call, a homebred for Three Chimneys, set a new track record in the Audubon Oaks clocking 7 furlongs in 1:21.17.

Following their successful careers, both Gun Runner and Funtastic joined the Three Chimneys’ stallion roster. Gun Runner’s first crop of yearlings were offered at auction in 2020, with 46 lots sold during the yearling auction season for an average of $246,413, with a top colt of $775,000 and a filly for $750,000. Gun Runner’s average led all First-Crop sires, while Funtastic will have his first yearlings in 2021.

With other young sires Fast Anna, Sharp Azteca and Will Take Charge, and stalwart Sky Mesa, Three Chimneys Farm is positioned now more than ever to again become a worldwide leader in Thoroughbred breeding industry.