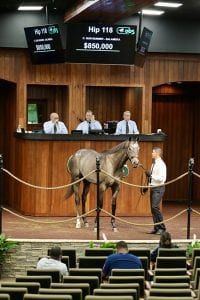 A colt from Gun Runner’s first crop lit up the board during Tuesday’s opening session of the OBS Spring Sale of 2-year-olds when hip No. 118 brought a winning bid for $850,000 from agent Donato Lanni on behalf of Michael Lund Petersen.

“He’s a beautiful horse,” Lanni said after securing the colt. “Just a cool horse. He did everything he was asked to do and came out of in really good shape. We are just happy, happy, happy to get him. He was the horse we wanted to go home with.”

The colt was consigned by Barry and Shari Eisaman’s Eisaman Equine and was bred by the couple’s Eico Ventures.

“He is a wonderful horse and we thought he was going to sell well,” Shari Eisaman said. “I was going to be thrilled with $500,000. This is the most I’ve ever sold a homebred for–the homebreds have paid for the farm, they’ve paid for everything. Thank the Lord.”

The colt, who worked a furlong in :10 flat at last week’s under-tack show, is out of graded stakes-placed Salamera.

Gun Runner has been by far and away the leading First-Crop 2-year-old sales sire, with a current average price of $592,500. His top juvenile was a $1.7 million colt, Needmore Guns, who sold at last month’s Fasig-Tipton March sale. That colt, like today’s session topper, will be trained by Bob Baffert.