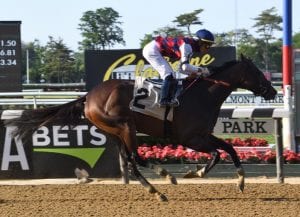 Always Carina coasts to a “Rising Star” victory on May 20, 2021 at Belmont Park – NYRA photo

Three Chimneys Farm’s homebred 3-year-old filly Always Carina put on a show in a Thursday allowance at Belmont Park, rolling to a nearly 10-length victory to claim her second win in as many starts.

Named a TDN Rising Star following the blowout victory, Always Carina was arguably more impressive than in her April 11 debut, when she earned a Beyer Speed Figure of 94.

The dark bay filly stumbled out of the gate, but recovered quickly and had the lead in a matter of a few strides. She was under restraint through a half-mile in :46.81, then as she passed the quarter-pole, was allowed to run free. She responded immediately to open up on the field and coasted under the wire by 9 3/4-lengths in 1:36.38 for the mile on the fast track.

Always Carina is a daughter of the recently deceased Malibu Moon and is the second foal out of Miss Always Ready. Her first foal by Palace Malice, Structor, won the 2019 Breeders’ Cup Juvenile Turf (G1) and Pilgrim S. (G3).