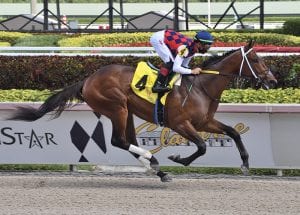 In a Saturday Gulfstream Park maiden race full of potential stars, Collaborate outshone them all with an incredible 12 1/2-length victory, leaving Bennyfromthebronx, half-brother to Grade 1 winner Charlatan reeling as he drew off in the stretch for the eye-popping win.

Collaborate was bred by Three Chimneys Farm, who co-owns the bay 3-year-old with e Five Racing Thoroughbreds. The colt was a $600,000 purchase by bloodstock agent Mike Ryan at The Saratoga Yearling sale at Fasig-Tipton in 2019.

Getting away cleanly from post four, Collaborate soon took the lead and carved out fractions of :23.72 and :46.57 while going along very easily. Longshot King Force applied some pressure on the turn, but Collaborate was still just cruising along, and when Tyler Gafflione asked him to run at the head of the stretch, he quickly left the field behind. He widened his lead all the way to the wire as he stopped the timer in 1:36.35 for the mile after being eased up in the final sixteenth.

The winner was named a TDN Rising Star after the head-turning win. Saturday’s win was just his second lifetime start, following a troubled trip loss in his Feb. 6 debut. The son of Into Mischief is nominated to the Triple Crown, paving the way for a stakes start in his next outing.

Collaborate’s dam Quiet Temper has an unnamed Gun Runner 2-year-old filly and was bred back to the Three Chimneys stallion for the 2021 season.