Gun Runner got the 2021 Saratoga meet off to a rousing start when Echo Zulu scored an emphatic 5 1/2-length victory in a $100,000 maiden special weight race in her racing debut, earning a 92 Beyer. 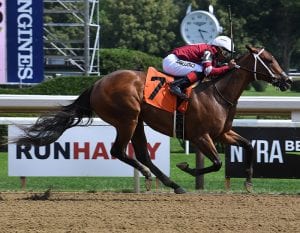 Echo Zulu cruises to a debut victory on July 15, 2021 at Saratoga – NYRA photo

Facing a field laden with top-class pedigrees, Echo Zulu got away very well from the gate, tracking favored Lady Scarlet for the first three furlongs. She took command in upper stretch and drew away with every stride to win in hand in 1:04.69 for the 5 1/2-furlongs on the fast track.

“Being from the first crop of Gun Runner, the success they’ve already had, the sky is the limit for this filly,” said trainer Steve Asmussen.

Asmussen added that the Adirondack S. and Spinaway S., later in the meet, are distinct possibilities for Echo Zulu’s next start.

Echo Zulu is owned by L and N Racing LLC and Winchell Thorougbreds, who purchased the filly for $300,000 at the 2020 Keeneland September Yearling sale.