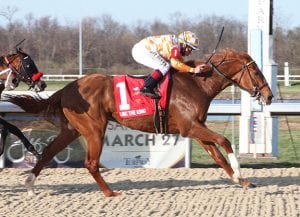 LIke the King winning the 2021 Jeff Ruby S. at Turfway Park – Coady photo

The chestnut colt earned 100 points for winning the Kentucky Derby challenge prep race, assuring him a spot in the May 1st Run for the Roses.

Though he broke from the inside post, Like the King and jockey Drayden Van Dyke dropped well off what would prove to be a brisk pace. Moonlight Strike sped through a quarter-mile in :22.93 and a half in :46.81, with Like the King some eight lengths from the front. He began to gain ground entering the final turn, and was six wide coming into the stretch. Like the King was bumped stoutly by Hard Rye Guy in upper stretch, but overcame the incident to go on to win by a length over Sainthood in 1:50.22 for the 1 1/8-miles on the synthetic surface.

“We spaced out some of his races and I think it’s helped because he’s a big, rangy colt,” winning trainer Wesley Ward said. “He’s always shown an affinity for grass and that’s why we kept him on the Tapeta surface this winter with this race in mind. We were in the Derby once before but had post 20 and Mr. [Michael] Tabor wanted to scratch. Now that we’re here again it’s very exciting.”

Like the King, who was second in the John Battaglia S. in late February, is now 3-2-1 in six starts and has earned $200,680 for the M Racing Group. He was bred in Kentucky by Horseshoe Racing LLC and is the first foal out of Like a Queen, who has a Fast Anna yearling and was most recently bred to Palace Malice. Like the King was the third highest-price lot at the 2019 OBS October yearling sale when selling for $170,000.

Like the King is Palace Malice’s fourth graded stakes winner. With today’s results, he is one of only five Third-Crop sires with at least $1 million in progeny earnings.