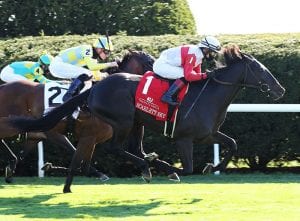 Out of the picture with a furlong to run in Friday’s $150,000 Transylvania S. (G3), Scarlett Sky flew past the field in deep stretch to best Palazzi and last year’s Breeders’ Cup Juvenile Turf (G1) winner Fire at Will to win by a half-length.

Scarlett Sky, 3-year-old son of Sky Mesa, was making his graded stakes debut in the 1 1/16-mile turf contest after finishing a close second to Annex in the Palm Beach S. in late February. The Transylvania did not set up well for Scarlett Sky, with Fire At Will setting a dawdling pace of :49.83 for a half-mile. Scarlett Sky was still well back after six furlongs in 1:14.32, then kicked into gear entering the stretch. Running down the middle of the course he stormed to the front in the final 50 yards to get the win in 1:43.89 on the “good” turf.

“I knew they weren’t going very fast,” said winning rider Joel Rosario. “In the first turn, I wasn’t far away from (the front). I just let him get his feet into the ground, and he came with a strong run like he always does. He put in a good finish.”

Scarlett Sky is a Stuart Janney III homebred and is trained by Shug McGaughey. Friday’s win improved his record to 3-3-0 and earnings to $210,400.

Pedigree notes from the TDN: