Will Take Charge rocketed to the top of the 2021 Fourth-Crop Sire list Saturday when Will’s Secret splashed her way to a 5 1/4-length victory in the $200,000 Martha Washington S. at Oaklawn Park. 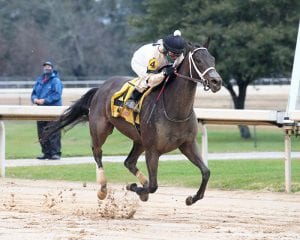 The Martha Washington is Oaklawn’s first of three races for 3-year-old fillies on the Road to the Kentucky Oaks, and earned Will’s Secret 10 points in the challenge series.

Will’s Secret, a Willis Horton homebred, was making her first start since breaking her maiden on Dec. 20 at Fair Grounds. In the second flight of horses through the first half-mile, she began to move closer while four-wide on the final turn. She roared off the turn and put away Joy’s Rocket at the head of the stretch, winning while full of run in 1:38.78 on the muddy racetrack.

Will’s Secret is the first foal out of Girls Secret and now sports a 2-0-2 record in five starts, with earnings of $163,300. Horton also campaigned Will Take Charge, who won an Eclipse as champion 3-year-old Male in 2013.