Will’s Secret stamped herself as one of the top 3-year-old fillies in the country with her victory in Saturday’s $300,000 Honeybee S. (G3) at Oaklawn Park.

The Honeybee is a key prep for the Kentucky Oaks (G1), and earned the 3-year-old Will Take Charge filly 50 points on the Road to the Oaks Challenge. 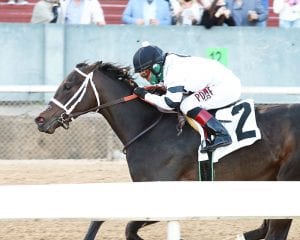 Will’s Secret, who won the Jan. 30 Martha Washington S. from off the pace, employed a front-running style on Saturday. She and Tabor Hall were virtually inseparable through the first six furlongs, when Will’ Secret began to edge away. In the stretch, Will’s Secret held off Pauline’s Pearl to win by three-quarters of a length in 1:44.61 on the fast track.

“It was a great ride (by Jon Court),” said winning trainer Dallas Stewart. “She loves that track. She showed a little more versatility, that she can be on the lead and finish it off and that’s really good to have in a racehorse. I just told [jockey Jon Court] to stay out of her mouth, let her break away from there and get around that first turn. She just coasted home from there.”

Owned by her breeder Willis Horton, who also campaigned Will Take Charge, Will’s Secret is now 3-0-2 in six starts and has earned $343,300. Her final Kentucky Oaks prep is likely to come in the Ashland S. (G1) at Keeneland.

Pedigree notes from the TDN

Will’s Secret is the fourth stakes horse of 2021 for the 2013 Champion 3-year-old colt Will Take Charge. The winner’s dam, Girls Secret, was purchased by Horton for $375,000 at Keeneland November in 2016. The first foal out the Giant’s Causeway mare, Will’s Secret has a juvenile full-brother.