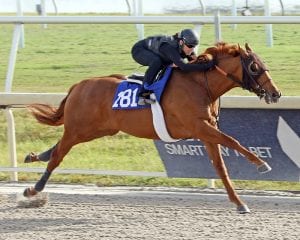 Gun Runner was easily the leading First-Crop sire at Wednesday’s Fasig-Tipton Gulfstream sale of 2-year-olds with a colt bringing a top bid of $1.7 million.

The chestnut colt, hip No. 181, was the second-highest priced lot by any sire at the sale and was one of only three juveniles to bring seven figures.

“I am ecstatic, but I am more ecstatic that Bob Baffert gets to train him,” Dean de Renzo said. “Now the horse will really get a chance to shine when he moves on to his next level. We knew he was going to do really well because he has done everything really well his whole life.”

Already named Needmore Guns, he is out of nine-time stakes winner Needmore Flattery.

Gun Runner also was represented Wednesday by hip No. 34, consigned by Classic Bloodstock, agent, and sold to John Kimmel, agent for Sean Flanagan, for $450,000. Another chestnut, the colt is named Torpedo Run. His second dam is millionaire Lady Tak, who is also the second dam of Grade 1 winner and new Three Chimneys stallion Volatile.

With the first two 2-year-old sales of the season in the books, Gun Runner leads all North American sires with an average of $592,500.