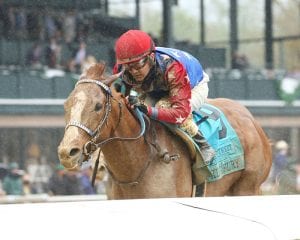 Fern Circle Stables and Three Chimneys Farm’s King Fury came from well off the pace to roll to a 2 3/4-length victory in Saturday’s $200,000 Lexington S. (G3) at Keeneland, setting the 3-year-old colt up for a possible start in either the Kentucky Derby (G1) or Preakness S. (G1).

King Fury earned 20 points on the Road to the Kentucky Derby challenge, which may not be enough to get him into the Derby, depending on which horses on the list above him elect to run in Louisville.

But the focus on Saturday was King Fury’s dynamic performance in the 1 1/16-mile Lexington. After sitting near the back of the nine-horse field while the leaders battled through a swift half-mile in :45.87, King Fury and jockey Brian Hernandez, Jr. began to make up ground quickly and split horses to take the lead as the field turned for home. Without any competition in the lane, King Fury coasted home in 1:43.50 over the sloppy going.

“I got to the five-eighths pole and went ‘Man, they’re in trouble from this point,’ because he was just doing it the right way and traveling and taking us the whole way,” said Hernandez, Jr. “He was so powerful today that I knew I would just be able to pick my way through like we did. He was just there for me the whole way.”

Trainer Kenny McPeek was looking towards the classics right after the win.

“I think he’s going to handle a mile and a quarter without any trouble,” said McPeek. “Whether he gets in (the Derby), it’s out of our control. We’ll see how he bounces out. We think a mile a quarter would be great. We’ll look at the opposition. The Preakness S. is a great race too. It could be either-or, but it would definitely one or the other.”

King Fury has won three of his starts, including the Street Sense S. last October at Churchill Downs, and has earned $262,739.