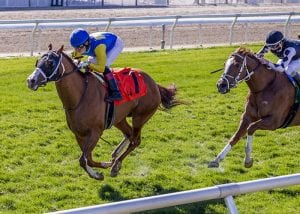 After a successful three seasons of racing exclusively on the main track, Manny Wah took to the turf Saturday at Fair Grounds and came away with a rousing victory in the $100,000 Duncan Kenner S. (VIDEO)

Though he had placed in nine stakes, including the Grade 1 Malibu S., Manny Wah got his breakthrough win Saturday. Last in the field of seven most of the trip, he kicked into high gear in upper stretch, making up an incredible amount of ground to blow by the leaders under a hand ride from Miguel Mena. He hit the wire 1 1/4-lengths in front of Just Might to finish the 5 1/2-furlongs in 1:02.38 on the firm turf course.

“Today was our day. We took a shot to run him on the turf and it worked out good,” said winning trainer Wayne Catalano.

Owned by Susan Moulton, Manny Wah is now 4-6-6 in 23 starts and has earned $501,888. He was bred in Kentucky by Martha Jane Mulholland and Modo Tesio Equine LLC. The chestnut 5-year-old’s dam Battlefield Angel is a sister to multiple graded winner Blended Citizen and Kentucky Derby (G1) runner-up Lookin At Lee.

Will Take Charge was a top-five Third-Crop sire of 2020 in several categories, including progeny earnings, winners and wins. He is standing the 2021 season for $5,000 S&N.