Brilliantly fast six furlongs in 1:07.57 in the Aristides S. running the final eighth mile in :11 and change

Clocked fastest final quarter in history of the Vanderbilt H. (G1) in :22.94 where he defeated a field comprised entirely of Grade 1 winners

Undefeated at age 3, with an average winning margin of over 5 1/2 lengths 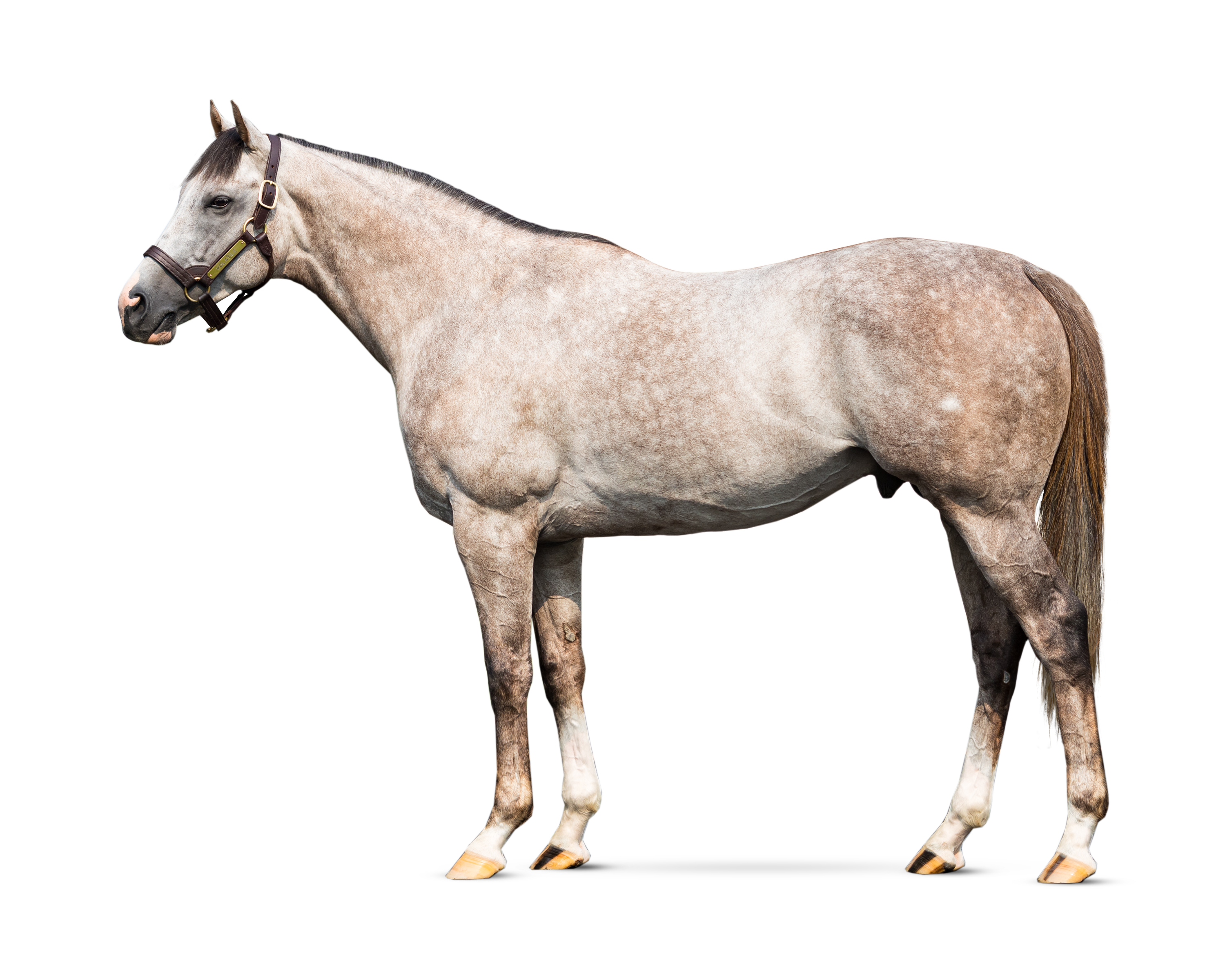 He is as fast as any horse I’ve ever trained. You will not find a better looking individual than Volatile, nor one with as much speed and raw talent. 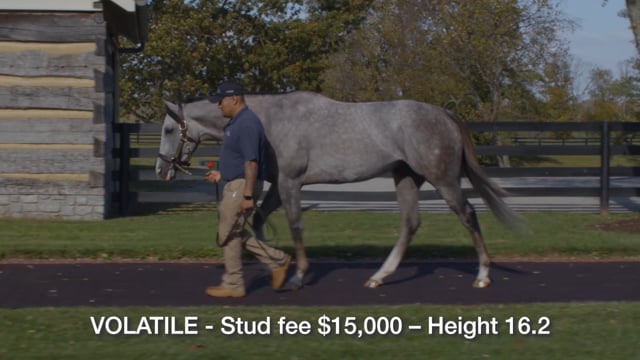 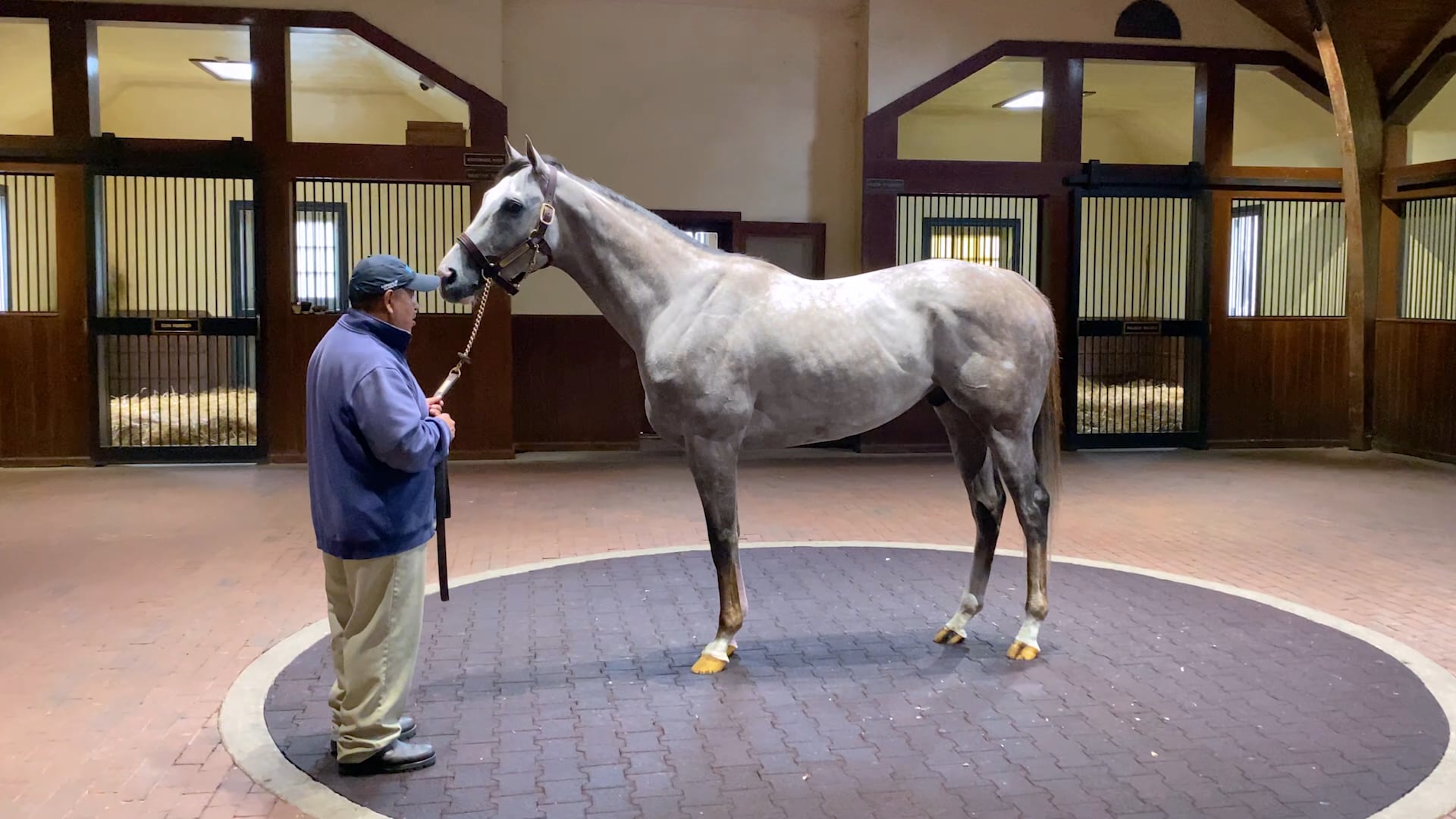 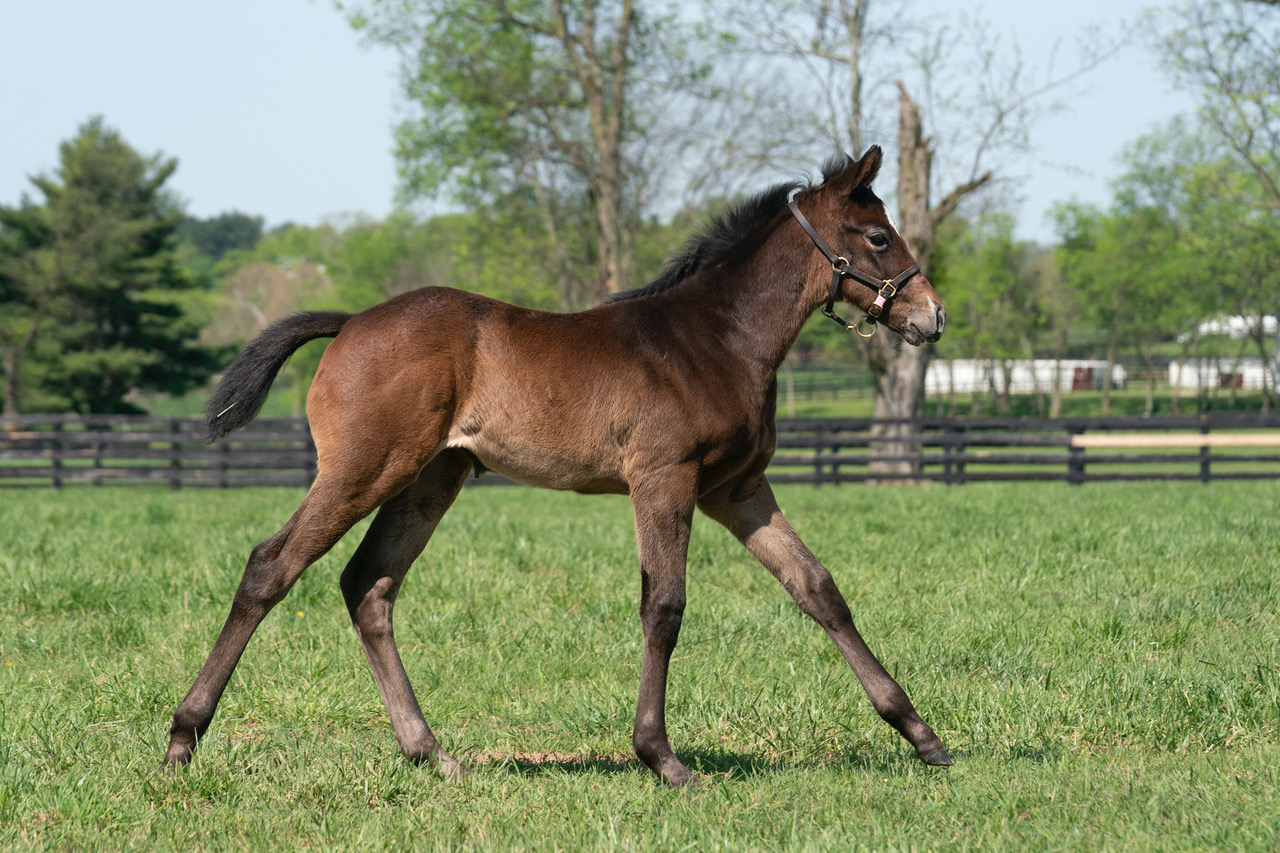 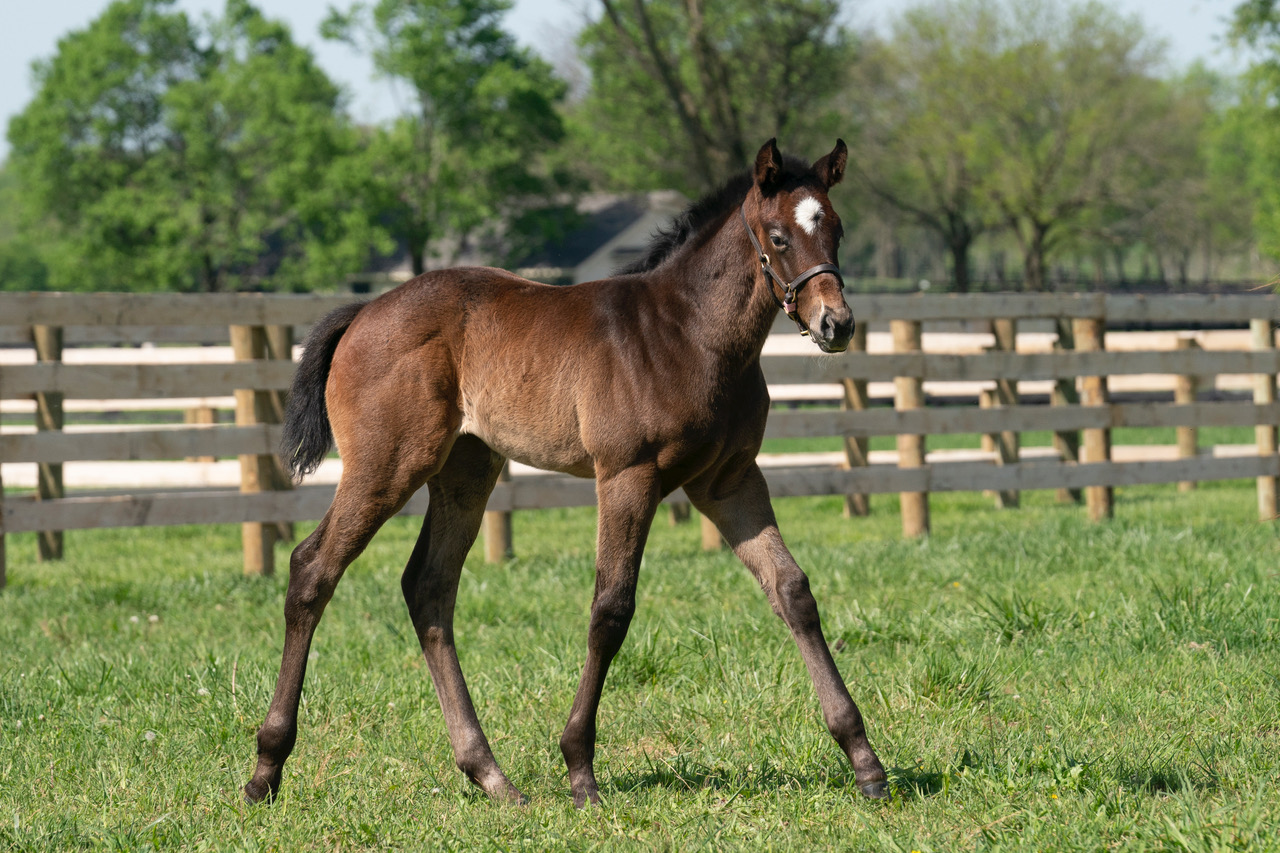 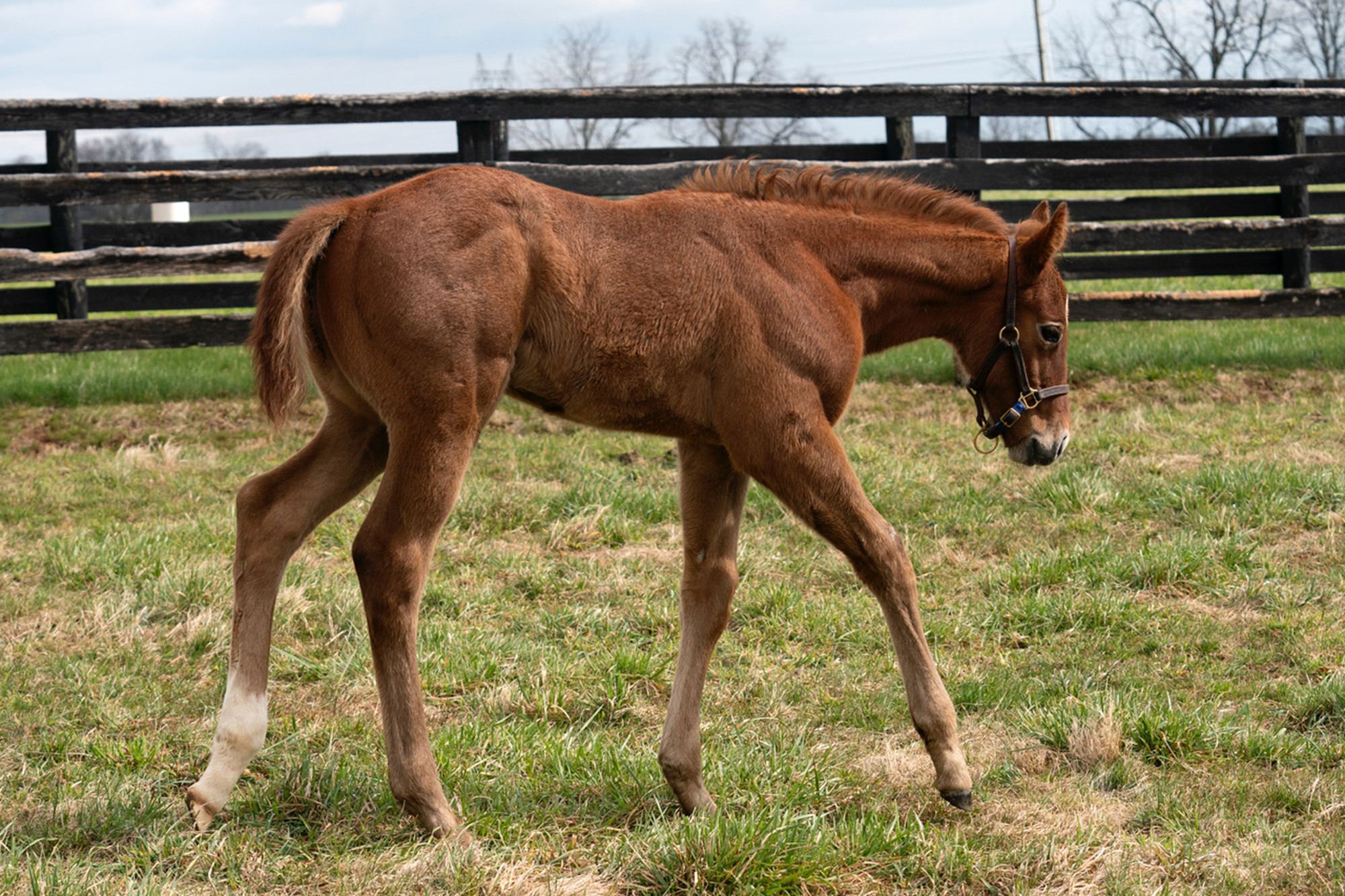 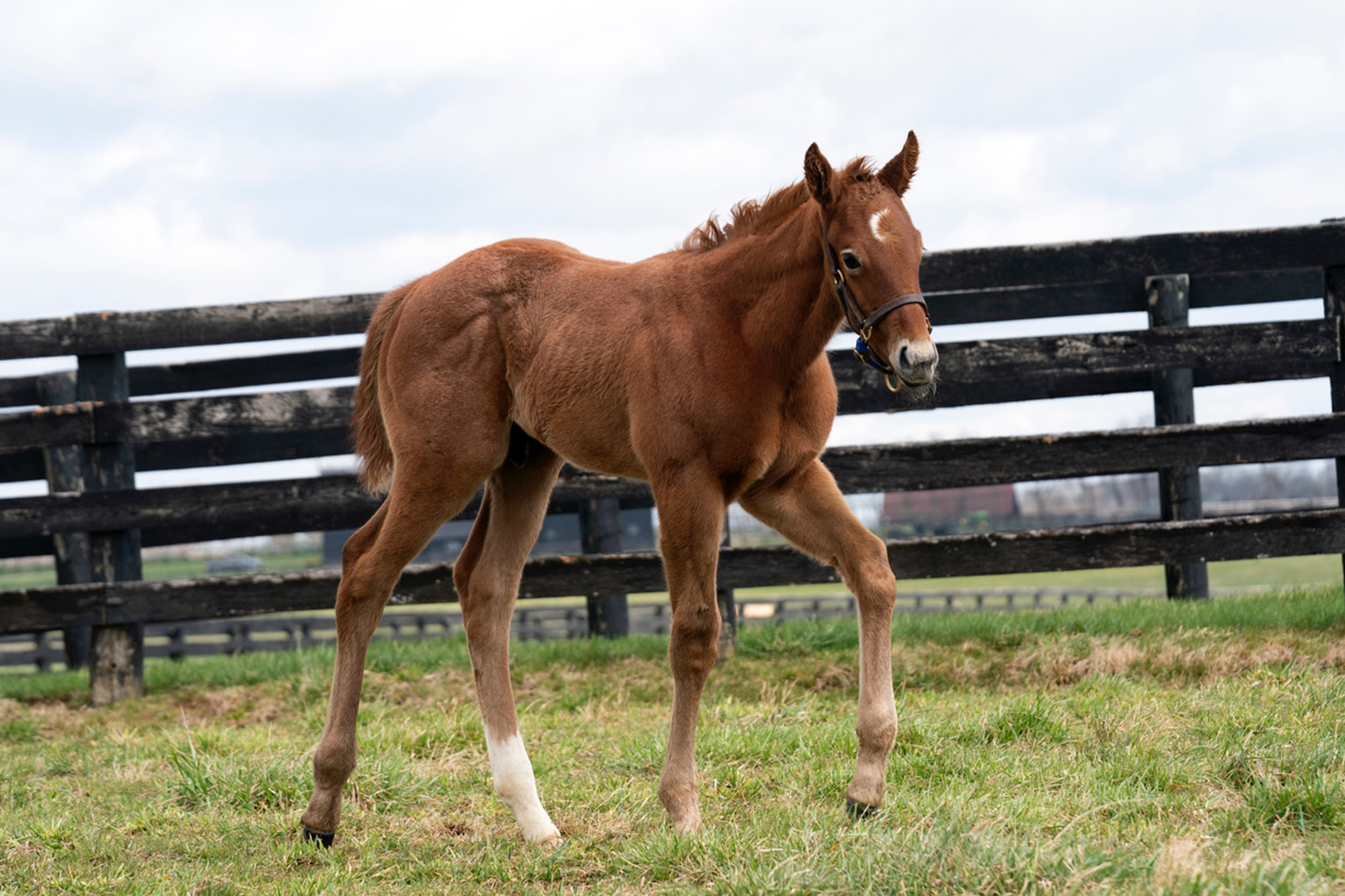 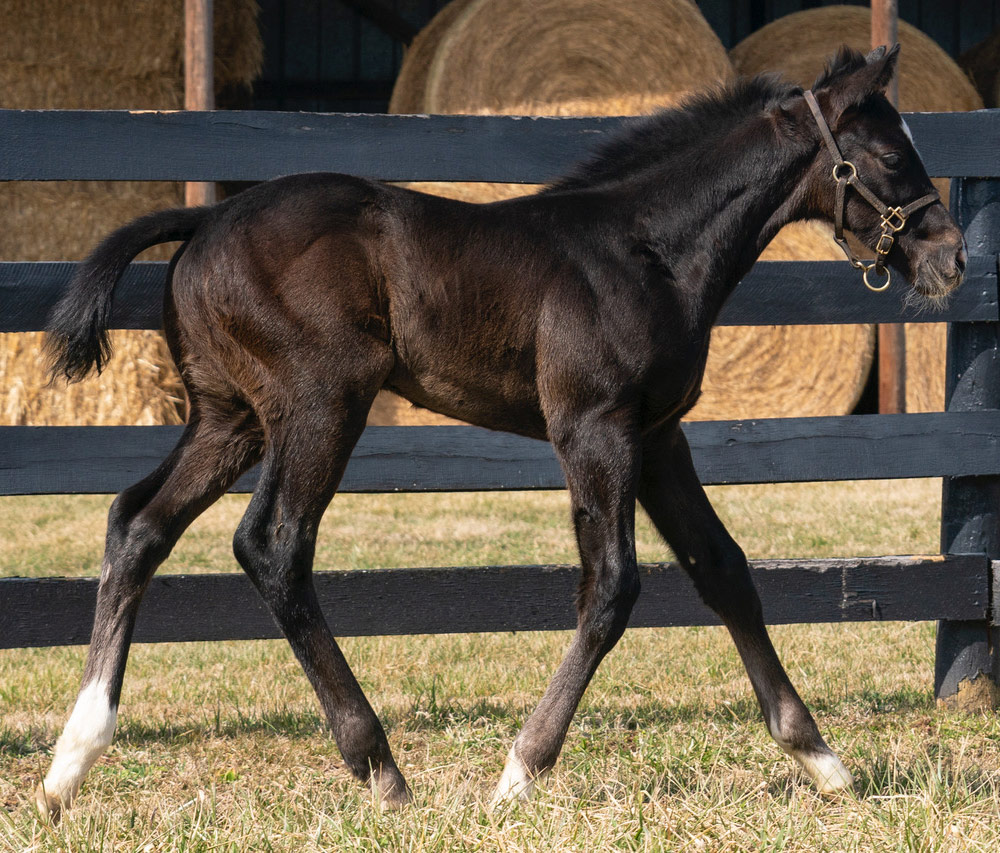 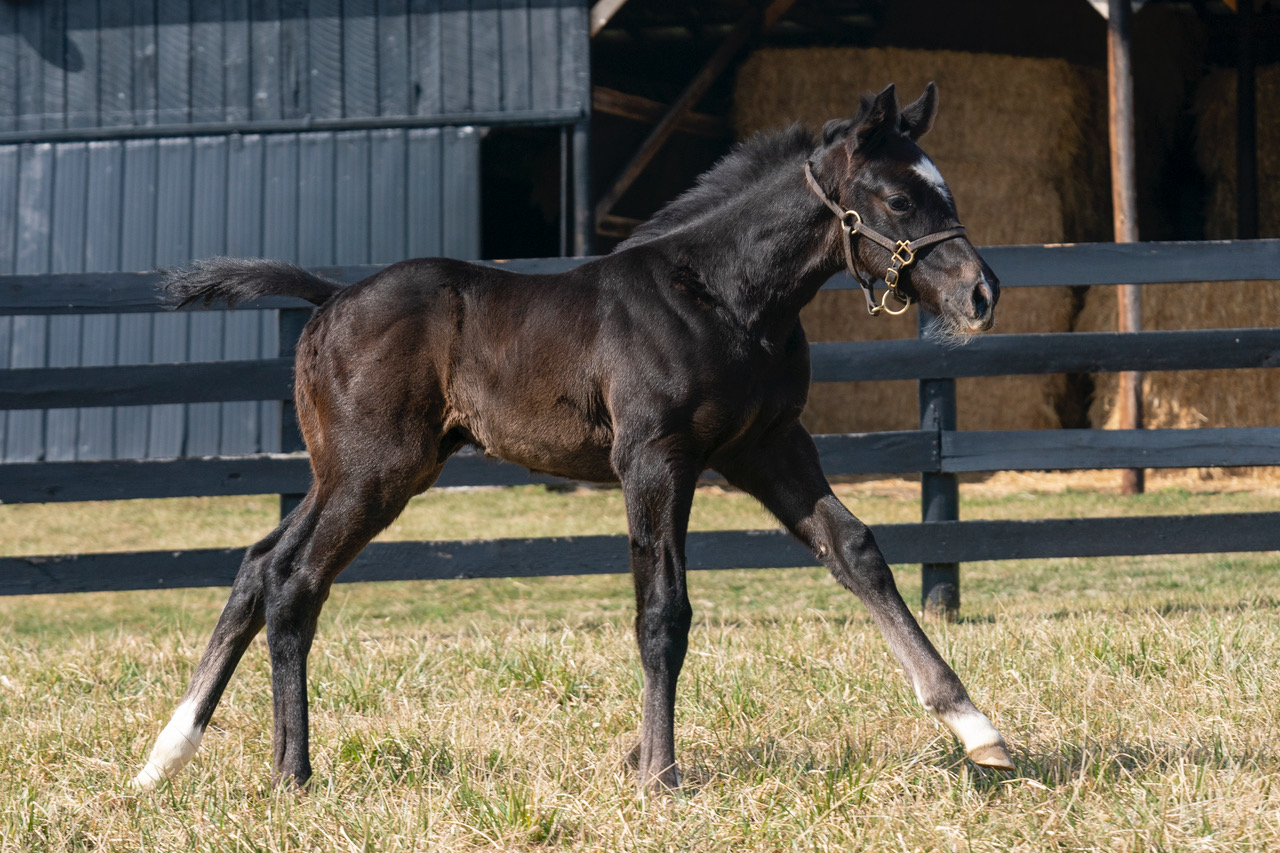 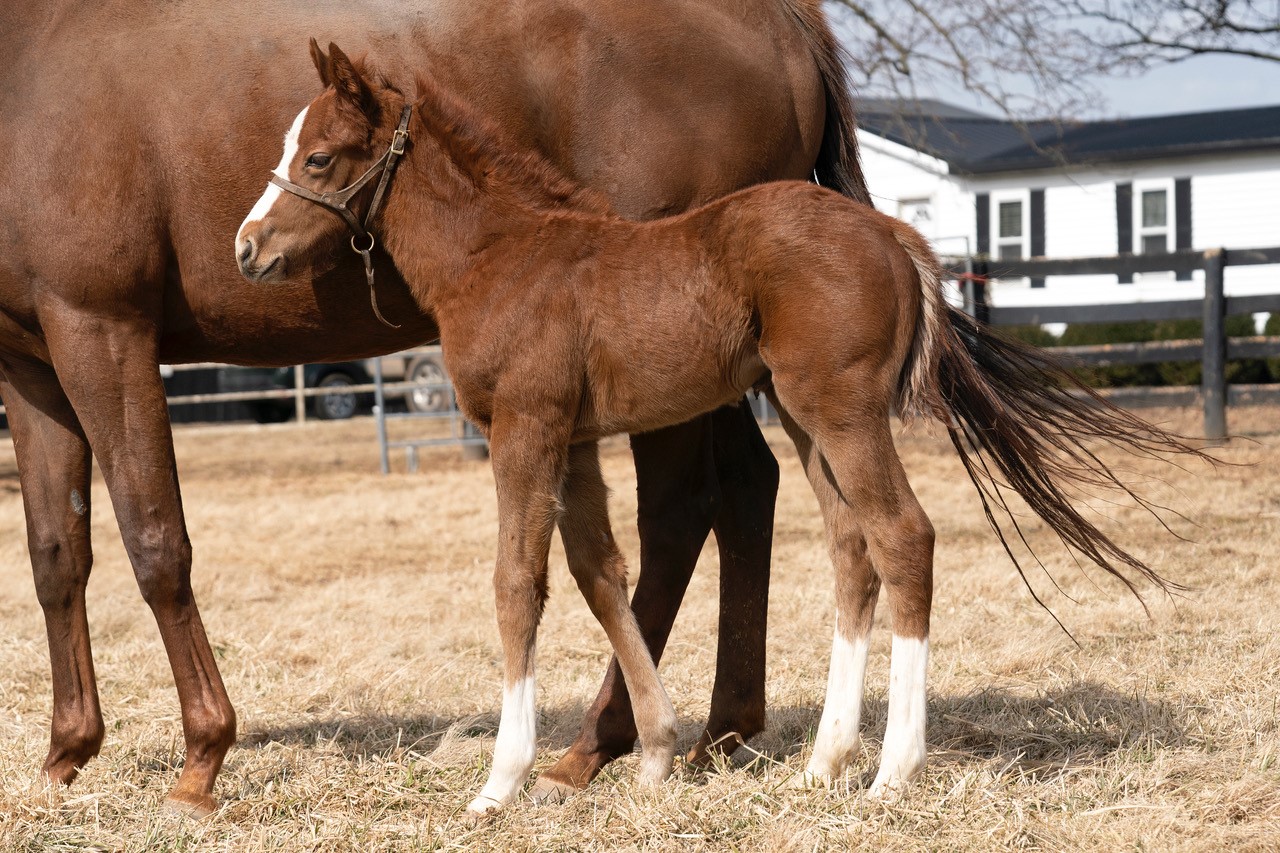 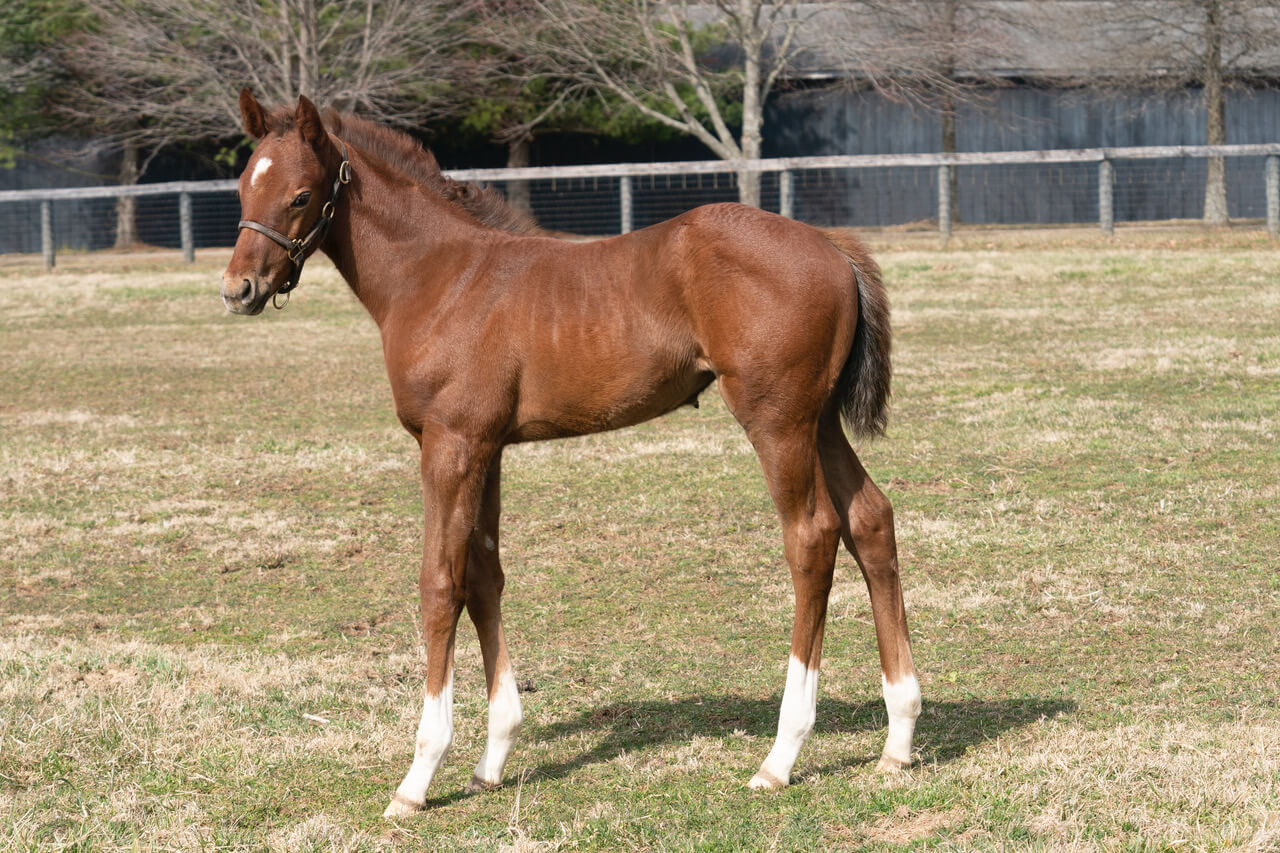 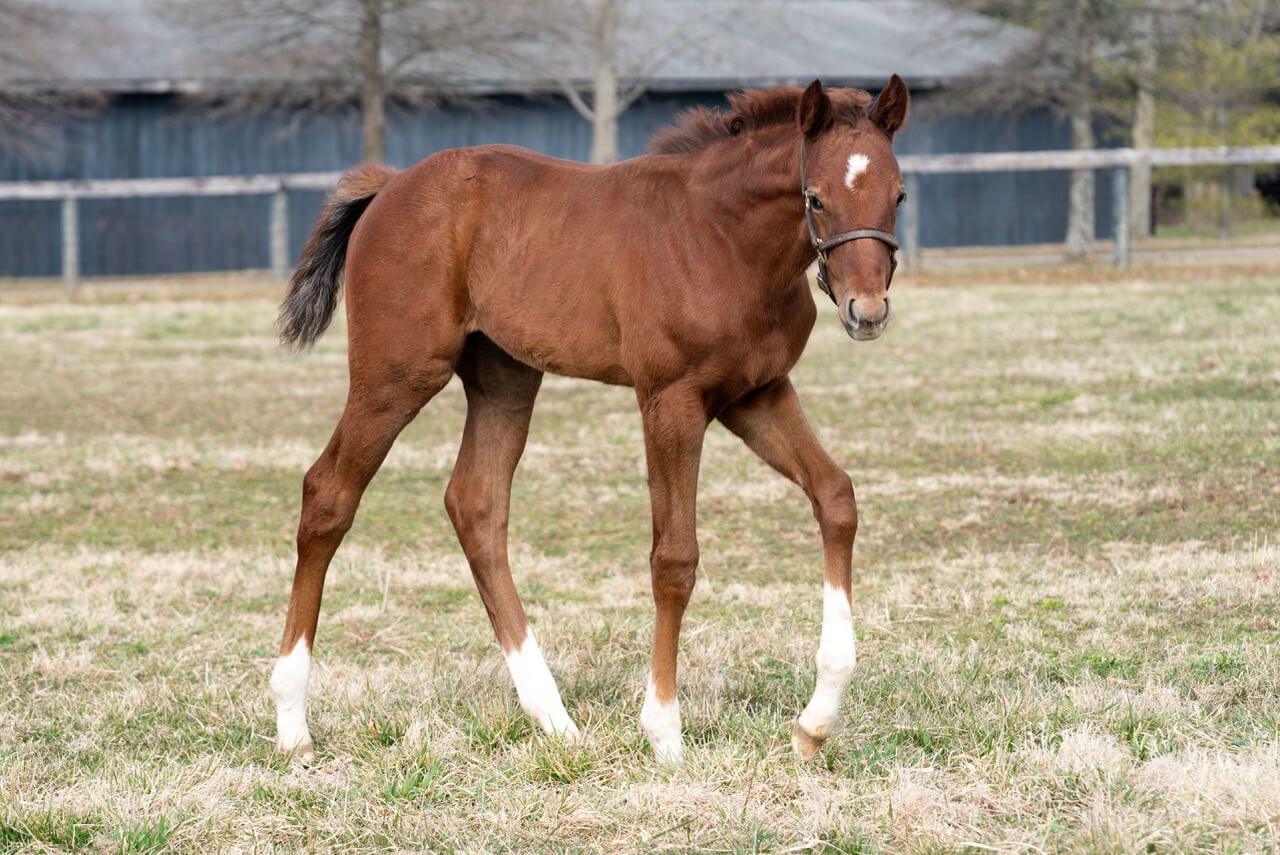 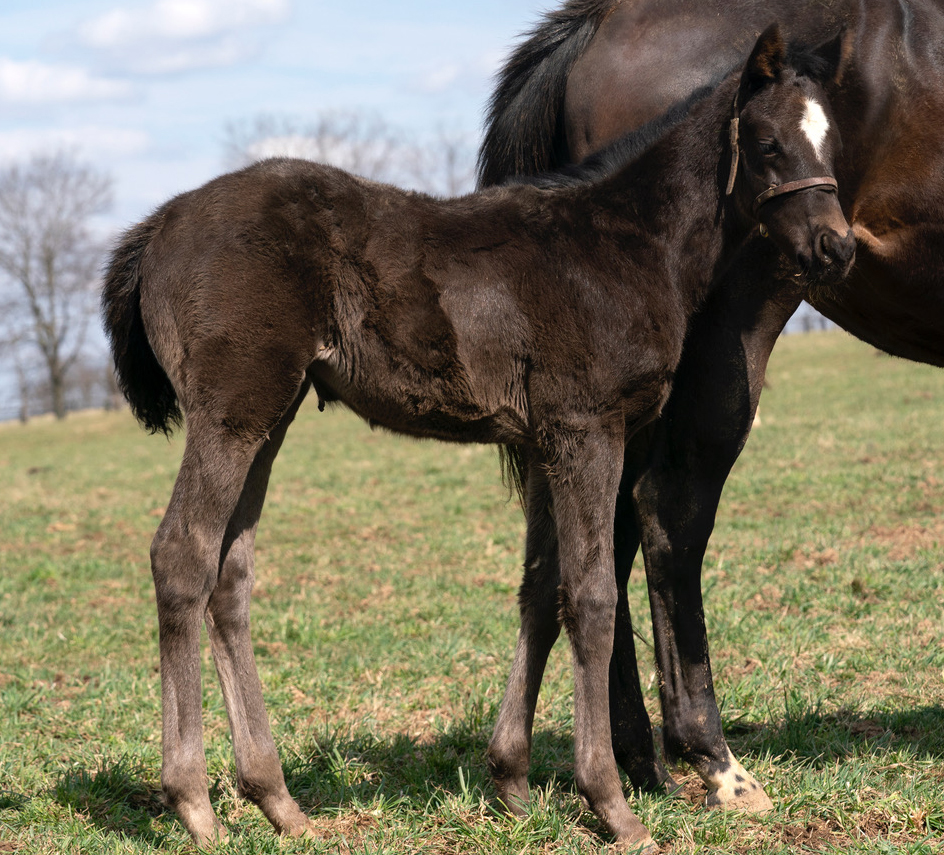 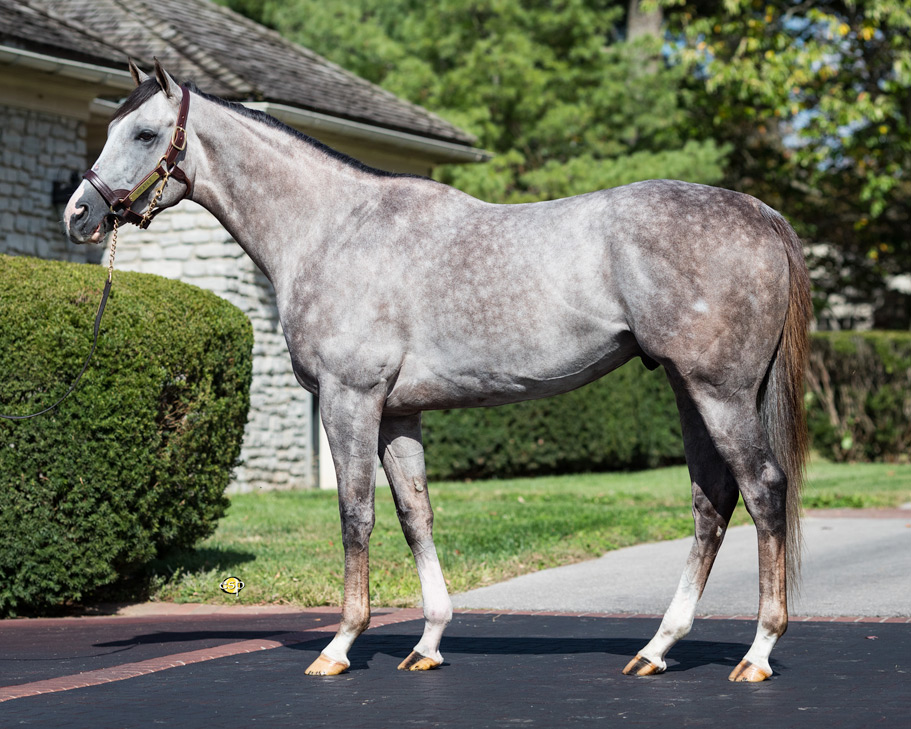 Watch a special video report courtesy of the Blood-Horse on Grade 1 winner Volatile, who has his first foals arriving ... 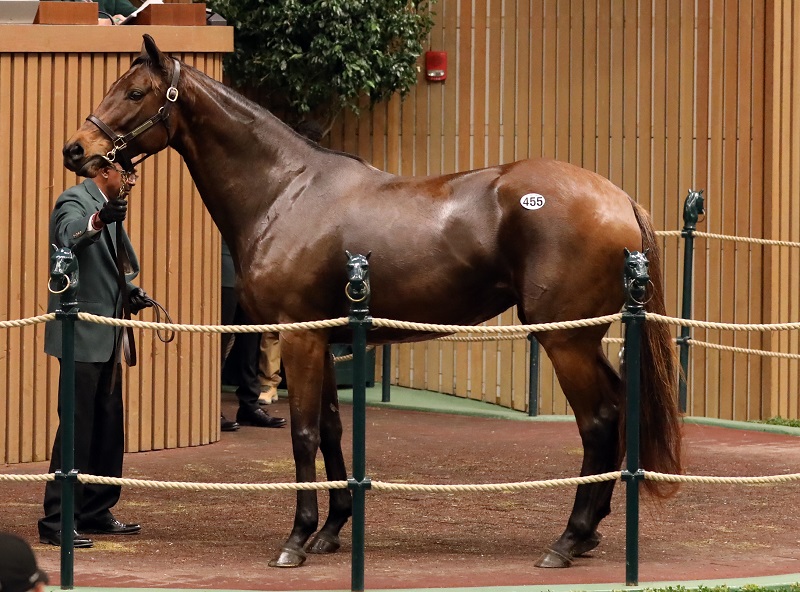 A winner of five of his six starts, Volatile took the Aristedes Stakes going six furlongs in a blistering 1:07.57, and decisively defeated a field consisting entirely of grade one winners to take the Alfred G. Vanderbilt Handicap (G1). He is by grade one winning two-year-old Violence, the leading stallion son of Medaglia d’Oro, out of Melody Lady, a stakes winning daughter of Unbridled’s Song and the multiple grade one winning Lady Tak.

Violence has grade one winner No Parole out of a mare by Bluegrass Cat, and graded stakes winner Feedback out of a mare by Tale of the Cat (sire of Lion Heart and Tale of Ekati), both from the Storm Cat line. Other sources of Storm Cat include Giant’s Causeway (sire of First Samurai and Eskendereya); Forestry (who looks interesting here and is sire of Discreet Cat and Shackleford), Scat Daddy (a son of Johannesburg, and grandson of Hennessy), Harlan’s Holiday (sire of Into Mischief, Majesticperfection and Shanghai Bobby), Bernstein, Stormy Atlantic, Storm Creek, Sea of Secrets, Forest Wildcat (sire of D’Wildcat and Wildcat Heir), Mountain Cat, Sir Cat, High Yield, Tactical Cat, Cat Thief and Tabasco Cat.

Storm Cat is from the Northern Dancer line, and Violence has one of his better runners, the graded stakes winning filly Cosmic Burst, out of a mare by Ghostzapper, who is by Awesome Again (also sire of Awesome of Course, Toccet and Wilko), from the Deputy Minister branch. This line can also be introduced such as through Dehere (sire of Graeme Hall), Silver Deputy (sire of Posse, Badge of Silver and Spring at Last), Touch Gold and French Deputy.

Violence is a Sadler’s Wells line horse, and he has a stakes winner out of a mare by Shakespeare, who is by Theatrical, a son of Sadler’s Wells’s three-quarters brother, Nureyev. There is also a Medaglia d’Oro grade one winner out of a mare by Ashkalani, from the Nureyev line. Medaglia d’Oro has enjoyed success with the Danzig branch of Northern Dancer, with a champion from a Danehill mare, and several other major winners out of mares by sons of that horse; a grade one winner from a Belong to Me mare, and a graded winner out of a Pine Bluff mare. We might also consider daughters of War Front (who who appeals here), Hard Spun, Exchange Rate and War Chant (broodmare sire of a Medaglia d’Oro graded winner).

Out of mares descending from Icecapade – a three-quarters relative to Northern Dancer – Violence has sired stakes winner Molto Bella out of a mare by Milwaukee Brew, a son of Wild Again, also sire of Wild Rush and Vicar.

Medaglia d’Oro has a trio of grade one winners out of mares by A.P. Indy, a son of Seattle Slew, and Violence has two stakes winners out of mares by A.P. Indy son, Pulpit, and another out of a mare by that horse’s son, Sky Mesa. It would also be possible to bring in Pulpit through Tapit (who might be particularly good here, and who is sire of Concord Point, Trappe Shot and Tapizar) and Stroll. There is also a Violence stakes winner out of a mare by A.P. Indy son, Bernardini (who appears a good fit and is also sire of Stay Thirsty and To Honor and Serve), which also suggests such as Mineshaft (sire of Discreetly Mine and Dialed In), Malibu Moon, Congrats, Flatter, Stephen Got Even and Golden Missile. It would also be worth introducing Seattle Slew through Vindication, Capote, who is from Volatile’s own female line, and who is sire of Boston Harbor.

Volatile is linebred to Mr. Prospector, but only one cross of that horse will appear in the first generation of his offspring, allowing him to be bred back over Mr. Prospector line mares. Medaglia d’Oro sired his magnificent daughters, Rachel Alexandra and Songbird, out of mares from Forty Niner line mares, and Violence has stakes winners out of mares by Forty Niner sons, Roar and Editor’s Note. Medaglia d’Oro has also done well with, Distorted Humor who is available through Any Given Saturday, Sharp Humor, Drosselmeyer, Flower Alley, Jimmy Creed and Maclean’s Music (who appears particularly interesting). Violence has graded stakes winning Talk Veuve to Me out of a mare by Point Given, a son of Thunder Gulch, and stakes winners out of mares by Street Cry (sire of Street Sense), City Zip and Not For Love. From other Mr. Prospector line mares, there are also Medaglia d’Oro line graded winners from daughters of Smart Strike (who is represented by Curlin, English Channel and Lookin At Lucky), Lemon Drop Kid, Jade Hunter and Smoke Glacken.

Violence is out of a mare by Mr. Prospector son, Gone West, and he has stakes winners out of mares by Gone West sons Speightstown (sire of Munnings) and Muqtarib, which suggests consider mares by Elusive Quality (sire of Quality Road), Mr. Greeley and Grand Slam. Volatile is out of a mare by Unbridled’s Song, by Unbridled, from the Fappiano branch of Mr. Prospector. It could work well to breed him back over other branches of these lines, through such as Empire Maker (sire of Pioneerof the Nile and Bodemeister), Broken Vow, Candy Ride (sire of Twirling Candy) and Victory Gallop.